In her third collection, Still Life with Mother and Knife, Chelsea Rathburn seeks to voice matters once deemed unspeakable, from collisions between children and predators to the realities of postpartum depression. Still Life with Mother and Knife considers the female body, “mute and posable,” as object of both art and violence. Once an artist’s model, now a mother, Rathburn knows “how hard / it is to be held in the eyes of another.” 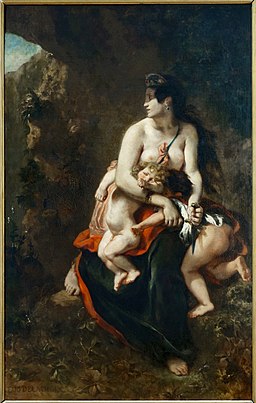 Intimate and fearless, her poems move in interlocking sections between the pleasures and dangers of childhood, between masterpieces of art and magazine centerfolds, and―in a gripping sequence in dialogue with Eugene Delacroix’s paintings and sketches of Medea (Delacroix’s Médée Furieuse is pictured at right)—between maternal love and rage. With singular vision and potent poetic form, Rathburn crafts a complex portrait of girlhood and motherhood from which it is impossible to look away.

Poems from the book have appeared or are forthcoming in the Missouri Review, Virginia Quarterly Review, the Southern Review, the Academy of American Poets’ Poem-a-Day, and other journals.

Praise for Still Life with Mother and Knife

“‘For proof the world is frightening,/ look no further than the aggression/ of goats and chickens, and children, too,/ and even my own loathing, half-/understood,’ writes Rathburn in her arresting third book, a gentle whirlwind of memory, trauma, and uneasy hope, savored almost as much as it is run from. What do we do about, or with, the past if it hurts us? What if our most poignant memories, our most urgent questions, are about our worst moments? In mostly short, crystalline lyrics, Rathburn probes these and other unanswerable questions.”
–Craig Morgan Teicher, National Public Radio
“‘I Reject Walls’: A 2019 Poetry Preview”

“In Still Life with Mother and Knife, Chelsea Rathburn tells us that we inhabit our own fairy tales, and we have to learn to walk alone in the woods–the briary forests of adolescence, the dark drifts of motherhood, and then the lonely sands of old age. What is beauty? she asks. What is love? In her incandescent Introductions, she contemplates the many ways we discover the world with its chiaroscuro of good and evil, the known and unknown, love and hatred. A deeply felt chronicle of the passage from childhood into full womanhood.”

“Chelsea Rathburn is canny about so many things, the body, the small town, the structure of memory, the relationship between a mother and her child, and even the maternal feelings of Medea. Few poets can write with such frankness and good humor about their physical being and at the same time reveal their souls. Art, parenting, marriage, the imprint of memory, the violence that hovers in the background of American life, all are expressed in poems made so well that you will shake your head with admiration for their craft. Hers is an art of sanity and clarity and is more welcome now than ever.”

A Raft of Grief

Praise for A Raft of Grief, selected by Stephen Dunn as winner of the 2012 Autumn House Poetry Prize

“In her excellent A Raft of Grief, Chelsea Rathburn probes the varieties and nuances of love and relationships with unsparing lucidity. “Maybe it’s not the eye/but the mind that can take only so much beauty, or solitude, or pleasure,/ maybe we travel both to find and forget ourselves,” she says in this book set in places as varied as Paris, Florida, Krakow.

“I love how she’s able to affirm what can happen between two people, while asking if a story-teller sometimes has to “sacrifice lovers and selves to the narrative arc?” She’s willing to, which is one reason why her narratives are so persuasive – her allegiance throughout is to the poem as a whole. She will not let her fine moments overwhelm, as lesser poets often do; her limpid, yet complicated phrasing is always part of the poem’s fabric.”

“Chelsea Rathburn’s canny, nervy poems play for keeps. She’s a poet of disarming intimations and unflinching reckonings, sparing no pains in parsing a meaning or probing a pang. Finely wrought and acutely felt, the bittersweet paeans and flinty laments in her new collection ace every acid test of lyric poise and resolve, bracing and beguiling in equal measures. Great hungers, little deaths, lost causes, a whole shifting cargo of ‘rages, lapses, and aches’ – for all the burdens in tow here, Rathburn’s resilient craft is a model of buoyant aplomb. A Raft of Grief is a superbly accomplished book from a poet who has truly arrived.”

Praise for The Shifting Line, winner of the 2005 Richard Wilbur Award:
“The line in Chelsea Rathburn’s exceptionally fine and promising THE SHIFTING LINE is not only the line of love, traced unflinchingly through its lucid confusions and murky clarities, but also the deeply human pulse of feeling and forms – both metrical and amatory – composed from the dissonance of a fully lived life. A remarkable debut.”
– B.H. Fairchild

“First books by young poets are sometimes praised as showing great promise, and this one does; but in its distinctive marriage of form and feeling, The Shifting Line is also a remarkable accomplishment. I am happy to have read and reread these poems, and for the new readers who will discover their pleasures.”
– Catherine Tufariello